THE CLOUDS OF MEMORY: HELIUM INFLATABLES FOR THE XACOBEAN YEAR 2010

The Sociedad Estatal de Conmemoraciones Culturales SECC with the collaboration of the Obra Social Fundación "la Caixa" and the Autonomous Communities that form part of the Jacobean Council, have designed the Programme of activities for the Xacobean Year 2010. 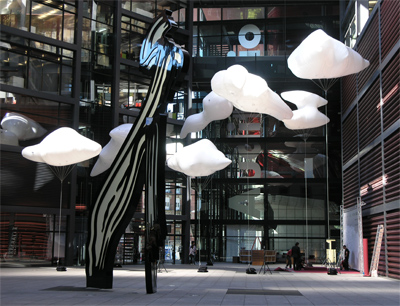 Within the cycle of activities in which art, literature, music and theatre will be central elements, is the project "Las Nubes de la Memoria" (The Clouds of Memory). The idea, conceived by the artist Eugenio Ampudia www.eugenioampudia.net/ will take 7 inflatable helium clouds carried by pilgrims to Santiago de Compostela.

For Ampudia "clouds are not just shapes. They carry within them the gaze of man. In their continuous making and unmaking, mutating and being reborn, they carry dreams, imaginations and memories. Someone, somewhere and sometime, looked up at the sky of clouds and chose one in which to leave his vision. chose one where to leave his vision. A cloud has a memory. An absolute memory, formed by its inexhaustible capacity to be shaped by the imagination of the beholder. A single cloud contains all images. Clouds carry information and transform it as they travel. transform it as they travel. From that cloud, which in passing carried away the image of our thoughts, remains this one, which contains yours". 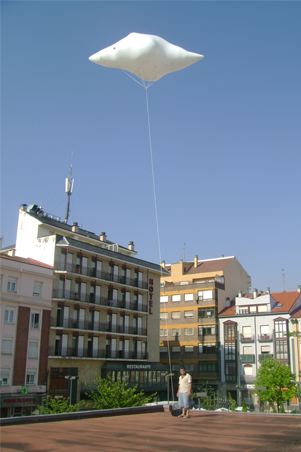 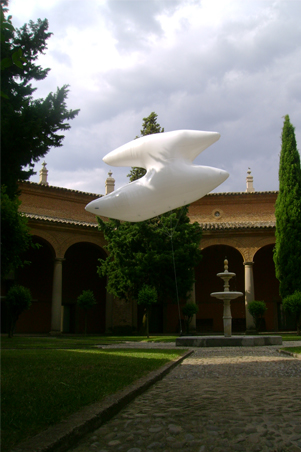 The Inflatable Clouds of Memory were presented on Tuesday 22 June at the Reina Sofía Museum. Afterwards, the inflatables began their journey to each of the art centres and spaces where the pieces of the exhibition Ars Itineris: the journey in Contemporary Art are exhibited.

On 11 July the first cloud will begin its journey from the Museum of Navarre to Santiago de Compostela, where it will be transported on foot by different pilgrims during each of the stages. In the rests of each stage of the road inflatable zeppelins shaped cloud will be hung in a hostel or in a space of the town with the aim that the public can see, projected on the inflatable, the different images that it has been recorded on its route together with those that the pilgrims or visitors to the various exhibitions have wanted to include in the pendrives. The projection will be accompanied by an audio composed for the occasion by Juan Manuel Artero.
Thus begins a process along the route that will bring together up to 7 inflatable clouds, each from an art centre, which will meet in the Plaza de la Quintana in Santiago de Compostela on 22 July. In Santiago de Compostela, there will be an audiovisual show which will project all the images and videos collected during the Camino on the square and the Plaza de Quintana.

We would like to thank the SECC and Eugenio Ampudia for their confidence in us www.publi-zeppelines.com/ for the production of the inflatable helium clouds. We do not want to forget Domingo, from the company Scnik, S.A., whose help has been invaluable.

We would like to share the photographs with you so that you can give us your opinion. 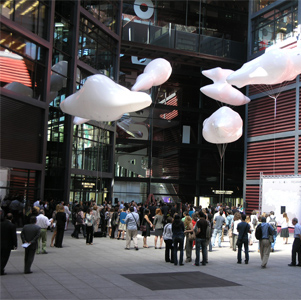